Barron Gorge National Park extends from the coastal lowlands to the elevated regions of the Atherton Tableland and is a spectacular geological feature of the Wet Tropics World Heritage Area and the centre of a fascinating network of historic trails. Rugged mountains, steep ravines, flowing streams and picturesque waterfalls make Barron Gorge one of Queensland’s most popular and picturesque national parks.

Rising from the rainforests of Mount Hypipamee National Park, the Barron River winds 60 km across the Atherton Tableland through one of Australia's highest rainforest belts. The river then enters the deeply-incised Barron Gorge, which forms a rugged, twisting trough between the Macalister and Lamb ranges. The river then falls 230 metres onto the narrow coastal lowlands and flows to the Coral Sea, just north of the Cairns Airport.

Barron Falls lookout is possibly the most well known waterfall lookout in Tropical North Queensland, and one of the most viewed sites in the World Heritage area. Best viewed during the rainy season in summer, the falls are a spectaular sight.You may be covered by a cloud of mist from the cascades when viewing during this time. Wrights Lookout offers one of the best views of the falls and it is located above the Barron Falls Railway Station which can be reached by foot or car. Other vantage points are from the Kuranda Scenic Railway and the Skyway Cablecar. 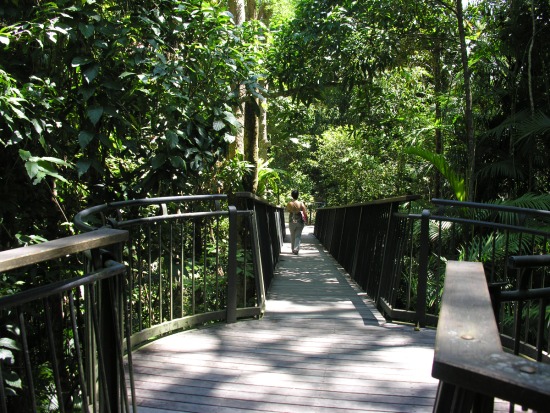 The park is part of the traditional lands of the Djabugandji Bama (local Aboriginal people) who maintain a close spiritual connection with this country. Before Europeans arrived, Bama traversed this country, developing trails linking the coast to the uplands. These historic trails now form sections of a walking track network that includes the Smiths and Douglas Tracks, Stony Creek Weir track, Surprise Creek track and the Barron Falls Lookout track. 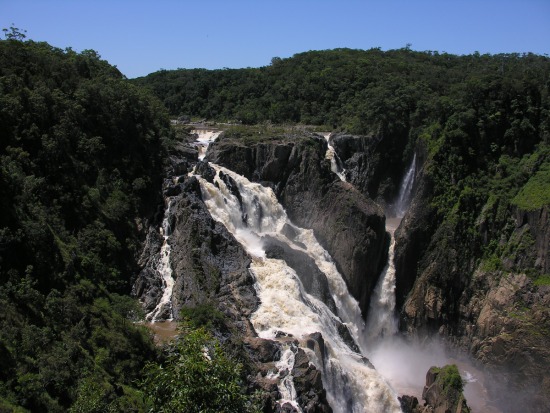 A small hydro-electric station, the first underground power station in Australia, was built in 1935 to harness the immense force of water surging over Barron Falls. It was later replaced by the Barron Gorge Hydro-Power Station further down the gorge in 1963. Barron Gorge Hydro sources water from the Barron River to produce electricity before releasing the water back into the river. Barron Gorge Hydro does not emit any greenhouse gasses and is one of only a few power generation facilities in Queensland able to supply green power. Only by a release of water or during flood events can tourists today have some idea of the former grandeur of the falls. 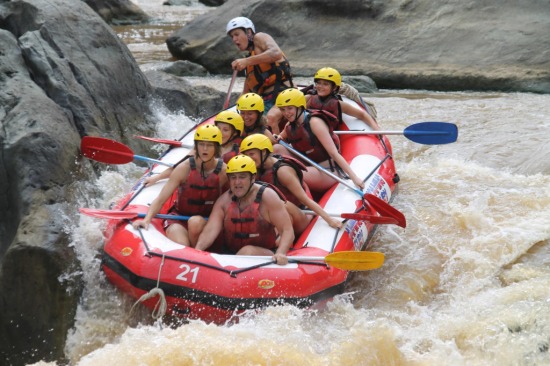 Half day white water rafting takes place on the Barron River providing a fantastic introduction to this adventure sport. Water levels are guaranteed all year round as the power station controls water levels of the river. Professional rafting guides will take you on an eco-adventure through the Barron Gorge National Park aboard an 8 person inflatable raft, tackling grade 2 and 3 rapids. 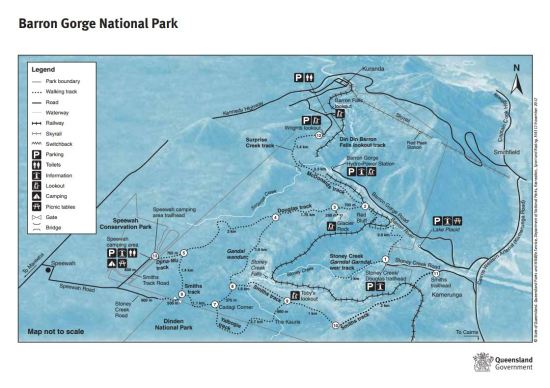 The WTWHA meets all four natural criteria for World Heritage listing. These criteria recognise the area’s exceptional natural beauty and the importance of its biological diversity and evolutionary history, including habitats for numerous threatened species. The WTWHA also has cultural significance for Aboriginal people who have traditional links with the area and its surrounds. 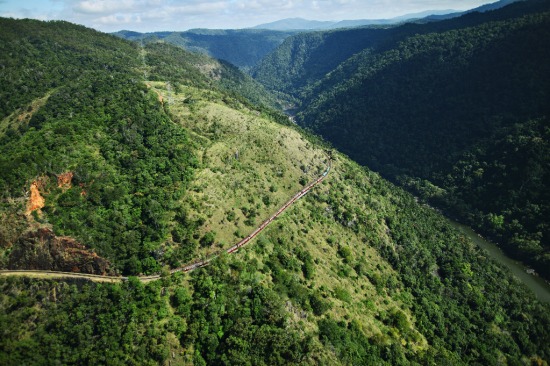 The rugged forest landscape, with its waterfalls and gorges, has been a part of Rainforest Aboriginal life since time immemorial. Stories from the dreamtime include the plants and animals that are a part of their cultural heritage, and many areas are significant cultural sites where traditional ceremonies are still held. Although the Wet Tropics World Heritage Area is not listed for its cultural values, we recognise the spiritual and cultural connection Rainforest Aboriginal people have with the land. Many Rainforest Aboriginal tribal groups use animals as their totem. The cultural significance of rainforest wildlife is shown through traditional dances and paintings that represent the many rainforest animals. 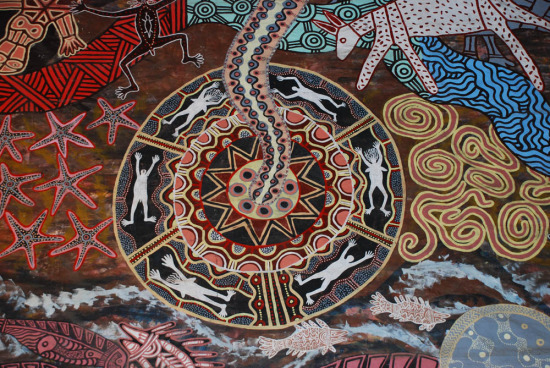 Forests thrive in this wet tropical climate. A diversity of forest types, including rainforests, open woodlands and mangrove forests grow in the wet tropics. About 3000 different species of plants are found here. Representatives of many of the world’s primitive fowering plant families live here, as well as many other primitive plant species, including palms and cycads, that are found nowhere else.

Wet tropical forests are home to many different animals, including over 80 endemic species of vertebrates—mammals, birds, frogs and reptiles—that are found nowhere else in the world. Most mammals are active only at night and therefore usually difficult to see. During the day, musky rat-kangaroos forage on the forest floor and agile wallabies graze in open areas in the late afternoon.

Spectacular insects, such as brightly coloured butterflies, and a diversity of beetles, and other invertebrates, thrive in rainforests. Many kinds of frogs and nearly half of Australia’s birds (more than 370 different species) also live here. While some reptiles, such as the estuarine crocodile and coastal taipan are well-known, others—such as some species of skinks and lizards—are less conspicuous and confined to small areas of cool upland rainforest.

A network of Aboriginal walking tracks—djimburru—traversed the traditional Djabugay lands between the tableland and the coast. The Djabugandgi Bama walked these tracks for trade, seasonal food gathering and to visit ceremonial sites. In the period of early European contact—around the late 1800s—the network of walking tracks was adapted by gold miners, cattle drovers and railway workers to cater for pack horses. The two main routes through the Barron Gorge became known as the Smiths and Douglas tracks. Today these historic trails, along with more recent linking tracks, form a network of long-distance walking tracks throughout the park. Walkers may choose from half and full day walks. 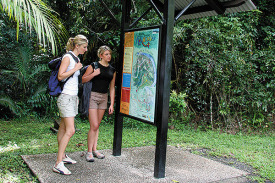 McDonald’s Track:
This is the access track between Kuranda and the historic trails of the Barron Gorge National Park. Features: dense rainforest, vine forest, grassland, lookouts. It is suitable for fit walkers.

The Douglas Track:
he Douglas Track is a historic 6·3km trail that links the Tablelands with the coastal plains near Cairns. Features: moderate to easy grades, dense rainforest, lookout access. Suitable for fit walkers. 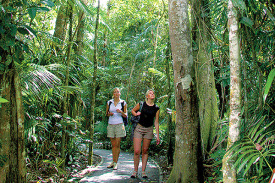 Smith’s Track:
Smith’s Track is an historic 7·9km trail blazed by miners to connect the goldfields on the Tablelands with the coastal port of Cairns. Features: moderate to steep grades, dense rainforest, vine forest, grassland, lookouts. Smith’s Track has steep sections and is best suited to experienced fit walkers.

Barron Falls Lookout is possibly the most famous waterfall lookout in North Queensland, is visited by thousands of people each year. The lookout offers a full frontal aspect of the falls, which are at their most spectacular during the wet season when the Barron River is in full flood. The falls are accessed via Barron Falls Road, or from the tourist train, which stops at the Barron Falls Railway Station. Skyrail’s cable car gondolas offer an alternative view from above. 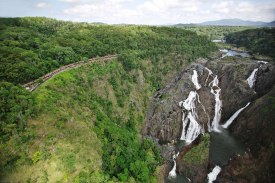 Wright’s Lookout overlooks the Barron Gorge, with views of the coastal plains and Cairns. Wrights Lookout is 4âˆ™7km from the centre of Kuranda, via Barron Falls Road. It is also the start of McDonald’s Track. 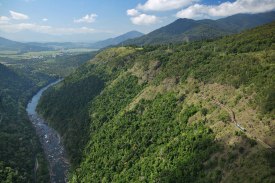 Glacier Rock is a spectacular cliff-top vantage point, perched high on an eastern extremity of the Lamb Range. It can only be accessed from the walking trails. For keen walkers, this vantage point is well worth the effort, whether you access it from Kuranda via McDonald’s Track or from Speewah via the Douglas Track. 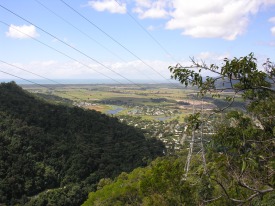 Toby’s Lookout is positioned on one of the highest points on Smith’s Track. Walkers following Smith’s Track to the coast or planning an alternative circuit route through the Barron Gorge National Park will visit this lookout before they descend to the Stoney Creek Trailhead. The views over Stoney Creek Gorge toward Glacier Rock are spectacular. 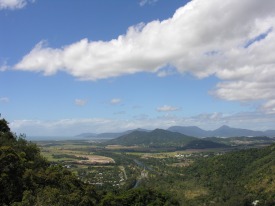 Bam-An Lookout is the last major vantage point on Smith’s Track before descending to the Stoney Creek Trailhead. It offers sweeping views over Kamerunga and the coastal plains north of Cairns. 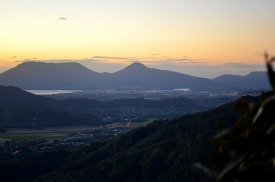